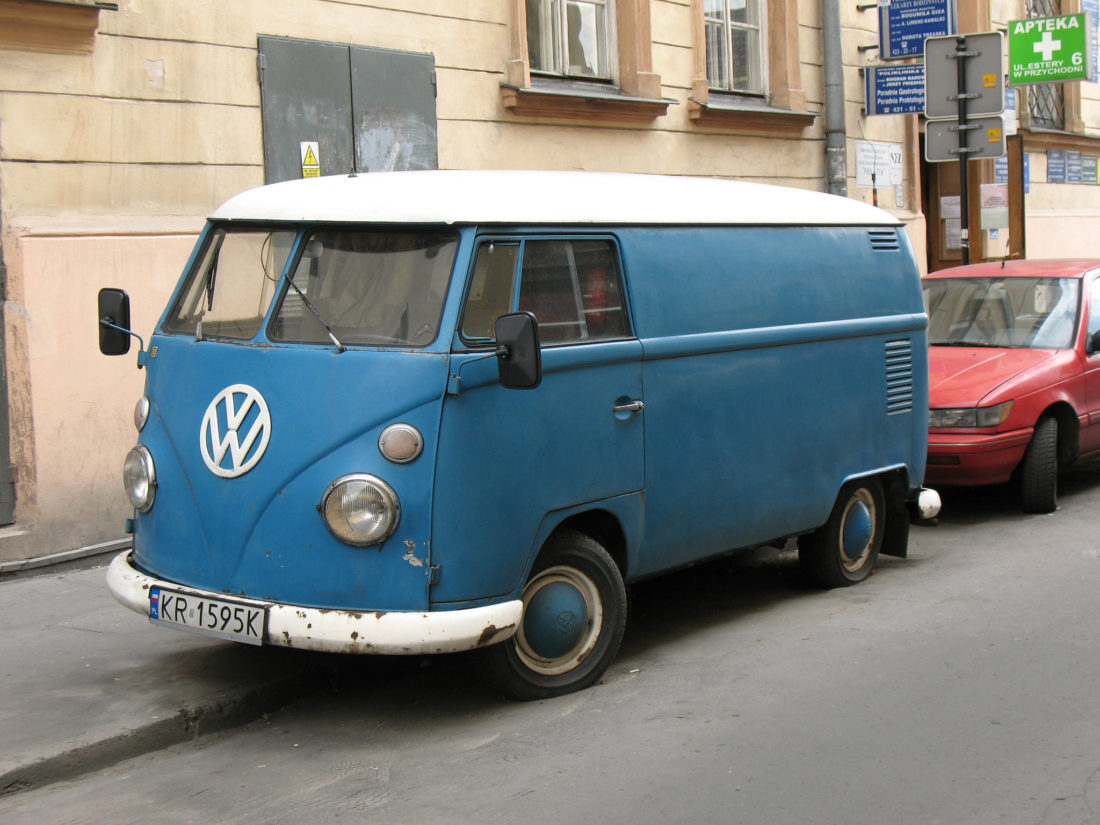 The VW Type 2 is the classic old-school camper van that popularised the compact leisure vehicle industry. VW Transporters are still made today, currently as the T5 model.

Known as the Eurovan in USA and Mexico, or Transporter in UK, Ireland & North Europe.

All Transporters from conception to the introduction of the 1990 T4 are knows as the Type 2.

The Type 2 was the second line to be produced by VW, the Type 1 (The Beetle) being the first. Introduced in 1950 the Type 2 initially shared many components and design features with the The Beetle. Officially called Transporter and Kombinationskraftwagen (“combined-use vehicle”) in German, hence where the Kombi nickname comes from. Popular terms in English also include “combi”, “vee-dub” and “microbus”.

The first pre 1967 versions had a slip front windscreen, which the “splitty” nickname comes from, but where also known as the Microbus. Produced from 1950 to 1967 in German, and then until 1975 in Brazil. All models have a air cooled rear-engine design.

In 1968 the T2 came into production. Subsequent versions had a large curved windscreen known as a “bay window”. So popular were the originals vans that they where often copied by manufacturers, and the many VW variants being used as refrigeration vans, hearses, ambulances, police vans, fire engines and of course camper vans. All models have a air cooled rear-engine design.

The T3 (T25 in UK & Ireland) was built between 1979 and 1991. In the late 1970s Volkswagen started to think about replacing the rear-engines Type 2 transporters. VW had successfully updated their car range to front-engined, water cooled designs. However, when updating the Transporter they continue to use the rear-engined design. It is believed that this was done after pressure from the works unions at the Salzgitter factory, when the boxer engines where built. The front-engined Transports where delayed until the T4 model. There are air and water cooled versions of petrol and diesel engines. From 1985 the 4-wheel-drive T3 Synchro was produced. The a slightly modified T3 continued to be produced in South Africa until 2002.

All Transporters since 1990 are no longer knows as the Type 2. This marks the end of the rear-engined design and the start of the front-engined vehicles.

The Volkswagen T4, released in 1990, was the first Transporter to have a front engine, and front-wheel-drive. Available in the regular and long wheelbase versions. Known as the Eurovan in North America. The transversally mounted engines came in 4, 5 and 6 cylinder, petrol and diesel versions. The most popular being the direct injection TDI diesel engines. These changes bought the aging Transporters to the modern age again.

Many T2 and T3 fans disliked the modernisation, but the new T4 was a hugely successful state-of-the-art vehicle. The T4 was produced for 14 years, until 2003. This made is second to only the T1 in terms of length of production.

In 1994 a re-shaped front end was introduced. This was required to fit the six-cylinder VR6 engine, originally developed for the VW Golf.

The Volkswagen T5 range was released to the European market in late 2003. The T5 directly replaced the T4, retaining much of its looks and dimensions. The T5 is not available in the USA or Canada. Instead Volkswagen worked alongside DaimlerChrysler to create a suitable successor to the T4.

There are many variations in the T5 European commercial range.

As with previous models there are is a large range of third-party conversions available. These include the typical range of utility vehicles, and of course camper vans.

In Europe, the Transporter Shuttle/Kombi , MPV van that seats between up to nine in comfort, it is an entry level model below the Caravelle/Multivan.

The Multivan, available with 7 seats in comfort, has a neat rail feature in which you can buy accessories & fit them in rails so accessories are secured or move seats into whatever configuration you can think of. The Caravelle has up to 9 fixed seats so does not have this option.

The Kombi/Multivan Beach & California are the camping versions of the new T5 range (T4 California only). The Kombi Beach comes with just a fold up bed whereas the California is a real Camper with beds,sinks and fold up seat & tables.

The VW Transporter is one one of the most popular base vehicles for camper van conversions. Read about the various VW Camper Van types.