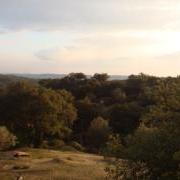 The roads from Madrid to Segovia

If you wish to avoid toll roads then the M-601 and then the CI-606 roads are the obvious choice. But be aware, that these take you to the Puerto de Navacerrada ski resort, nearly 2,000m above sea level. The incline is steep and there are few places to pass, but the views are breathtaking. The AP-61 is the easier drive, but is a toll road.

The roads from Segovia to Barcelona

The quickest route from Segovia to Barcelona is via the N110, the N122 and then the A68 to Zaragoza, where you meet the main A2 road. However, this route is almost entirely single carriageway and passes through many villages. For those looking for an easier drive, especially those with large vehicles, I would suggest driving from Segovia south to the R2 or A2 roads, and then continue on the A2 (also called E-90) to Zaragoza.

Free camping on the roads near Zaragoza

There are lots of large fuel stations on the main roads around Zaragoza. Most of these fuel stations have dirt areas to the side or back. Many truck drivers park overnight on these dirt areas. They are a good place to stop for the night. Safety is good, and you will always find at least a couple of trucks parked in each. Try and park out of the way of the trucks, as they need a large area to turn. Look at the tire tracks on the dirt to work out where they turn and park.

Toledo is one of Spain’s greatest cities. Now a National Monument and UNESCO Patrimony of Mankind. The extraordinary number of day-trippers has taken the edge of what was once one of Spain’s most extravagant experiences. However, the city and it’s sights are breathtaking. Toledo is a must for El Greco fans.

Toledo sits upon a rocky mound in a landscape of abrasive desolation. Surrounded by the looping gorge of the Rio Tajo. Every available space of the outcrop has been built upon with churches, synagogues, mosques and houses. Streets and cobbled lanes spiral and twist around the buildings.

Toledo hosts one of the most extravagant celebrations of Corpus Christi in Spain, with street processions and all the works.

The best places to park are in the streets around the Circo Romano.

Ctra. De Toledo-Puebla de Montalban km 0.7
tel: 925 220 090
1st class, and the best campsite in the area. A 30 minute walk or easy cycle to the city. Great views of the city and the river. Has a bar, swimming pool and small shop. Open all year. Expensive, but it is a 1st class site.

Close to the city: There is a very large shady park-like area quite close to the Camping El Greco campsite, on the Cm-4000 road. If you are heading from the A-5/N-403 road from the west, follow the signs for Camping El Greco, which start at a roundabout. Follow the signs, straight ahead at the roundabout by the hospital. The park area is on the left, close to a motor racing tack. The area is very big, and has parking laid out, I assume for the racing track as there is little else there. Also try the areas to the south of the river, there are some small dirt parking areas.
Further from the city: There is a shady picnic area on the A-42 Madrid road, about 1km from the start of the road in Toledo.

Merida contains more Roman remains than any other city in Spain. High in numbers and quality, the remains are a most see for anyone with an interest. Merida is the former capital of the Roman province of Lusitania. The modern town fills the gaps between the remains, and although nothing special the inner town is pedestrianised, which makes exploring on foot easy and rewarding.

Driving and parking close to the town is not recommended. Try parking amongst the supermarket which line the main road as you approach the town. After the Plus supermarket there are some side streets which continue down to the park, which are suitable for smaller vehicles.

tel: 924 123 055
Signposted off the NV and the road to Caceres. A pleasant site by the reservoir, 5km north of town. Has swimming, fishing and windsurfing. Open April to mid-Sept.

Caceres is similar to Trujillo. Caceres features a almost perfectly preserved walled town, the Cuidad Monumental, packed with solares built on the proceeds of American explorations. Caceres is much bigger and livlier than Trujillo. The town has many Roman, Moorish and conquistador sights. The walled old town is the heart of Caceres, with the picturesque Plaza Mayor. Everything worthy of a visit is close to this area. An annual Womad music festival is held in Caceres, with 70,000 visitors attracted to the town on the second weekend in May.

Trujillo is perhaps the most attractive town in Extremadura. It is a classic conquistador town of twisting narrow streets, mansions, towers and castle walls. Little has changed since the sixteenth-century. The streets are very atmospheric, especially around the castle. Plaza Mayor is the grand square from which the towns spreads.

It is worth parking a little out of the old town and walking, as the streets get narrow quickly and large vehicles might struggle.

There are not many options in Trujillo, but try around the bull ring, which is signposted.

Guadalupe is a small town perched up in the sierra to the west of Trujillo. The town is solely famous for the Monasterio de Nuestra Senora de Guadalupe, which for five centuries has bought fame and pilgrims to the region. Established in 1340 on the spot where an ancient image of the Virgin was discovered, said to be carved by St Luke. There is a turismo in Plaza Mayor.

Cuenca is an extraordinary looking town, with dramatic views set amongst mountainous, craggy countryside. Surrounded on three sides by the deep gorges of the Huecar and Jucar rivers. Balconied houses hang over the cliff top. The town is a busy with visitors from Madrid at weekends, so weekdays are the best time to visit. There is a helpful turismo in Plaza Mayor.

Follow the signs for the Cathedral and try one of the car parks up at the top of the old town.